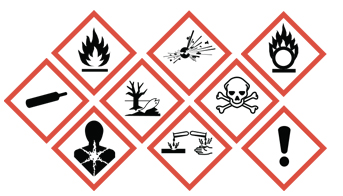 The CLP regulation had a phased implementation of some of its provisions. The key dates were:

From this date on, the classification of chemical substances and mixtures according to CLP regulation, which had just entered into force, was optional. It was mandatory to classify substances according to the rules set out under DSD (Dangerous Substances Directive) and mixtures according to DPP (Dangerous Preparations Directive). Labeling was made in accordance with the classification of the substance or mixture, therefore if the substance or mixture was already classified under CLP, then it should be labeled and packaged under CLP, if not then the DSD or DPD rules on labeling should be applied.

From this date on, DSD and DPD are repealed, consequently mixtures must be classified, labelled and packaged, before placing on the market, in accordance with CLP only. For substances the same obligation to classify, label and package according to CLP has already applied since 1 December 2010 – with the additional obligation to classify substances also according to the DSD until 1 June 2015 (provided in the SDS). Thus for both substances and mixtures only classifications according to CLP are needed from this date. However, mixtures already classified, labelled and packaged according to DPD and placed on the market before 1 June 2015 will only have to be re-labelled and re-packaged at the latest by 1 June 2017.